Over January 20th the official Digimon homepage was revamped in both Japanese and English, accompanied by a new Japanese-only website for the 2020 card game. This is the first such Digimon Card Game website since the closure of the Digital Monster Card Game Alpha homepage in February 2008, and it reveals several key details about the game's rules, as well as new card effects.

Promising the return of "that" Digimon card game, the main page ad gives us our first look at both the card back and Metal Garurumon, the face of one of three 500-yen Starter Sets available when the game launches this April. ("That" game likely refers to the popular Digital Monster Card Game that ran in Japan from 1999-2006, which over the past few years has seen new collector's sets published to coincide with the Digimon Adventure anniversary project.) Of note is that Bandai chose to publish the TCG information in both English and Japanese, even though the TCG site itself is Japanese-only. Bandai may be considering a future English localization--their popular Dragon Ball Super TCG became infamous in the English-speaking world for pulling players away from Cardfight!! Vanguard and other games, and with the western trading card market becoming increasingly open to games outside the "big three" thanks to Super and the Final Fantasy TCG, 2020 would be an ideal time to market a new game. 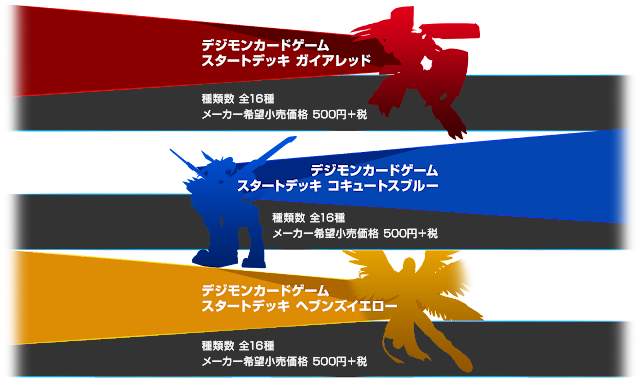 The three Starter Decks previously revealed are named Gaia Red, Cocytus Blue, and Heaven's Yellow, and will each contain 16 kinds of cards. The actual total number of cards in each deck is unknown. Typically if a game has 16 unique cards per starter deck, then the total deck size is 50, but depending on how many copies of each card is included, this could vary. The Starter Deck names come from the Japanese names of each featured Digimon's special attacks: Gaia Force, Cocytus Breath, and Heaven's Knuckle.

Aside from the Starter Decks, the 2020 TCG website is a part of Bandai's Carddass brand network, meaning the TCG will likely be distributed through both traditional booster boxes and trading card vending machines like past Digimon games.

The Memory Gauge
The 2020 Digimon Card Game webpage states that the TCG's "Memory Gauge" system will revolutionize Trading Card Games, and it certainly provides a unique spin on the standard mana formula. Take a look at the cards below:

The Memory Gauge is a resource shared by both players, used to pay costs. It starts at 0, but each player can voluntarily increase it at the expense of immediately ending their turn. Because it's shared by both players, the opponent increasing their Memory benefits you--if you have 2 Memory and the opponent has 3, then either player can play Digimon and use abilities with a cost of 5. This reduces the advantage either player gets out of going first or second, because Memory is necessary to evolve into or directly play Digimon, so both players are incentivized to give each other more Memory in order to deploy their respective strategies. Even though the player going first will be the first one to evolve their Digimon, the player going second will have more Memory available on any given turn.

This makes the Memory Gauge a fundamentally different kind of resource system from those found in Magic: The Gathering or Pokémon. Instead of having to draw a specific card dedicated to being a resource and play it each turn, the player in Digimon 2020 is given guaranteed ways to increase their resources and the possibility of receiving even more from their opponent. This is more akin to the Play Points found in Shadowverse, but with the addition of mindgames over whether or not to give the opponent more Memory on a particular turn in order to be able to pay higher costs on subsequent turns.

While the webpage says the gauge can be increased by paying the gray "Entry Cost" (登場コスト toujou kosuto) at the top left corner of a Digimon card, how this works isn't clarified. The full rules of the game are to be published in the April issue of V Jump on February 21st, and will likely leak a few days early as the previous issue did. 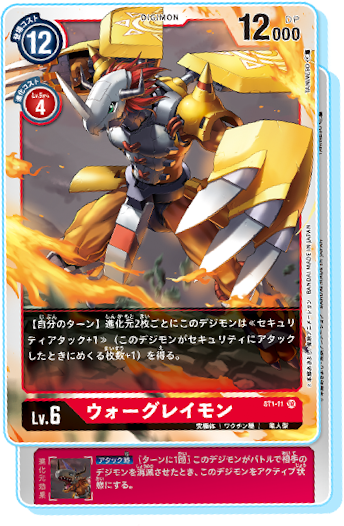 War Greymon
Level 6/Vaccine/Dragon Man
12000 Power
Entry Cost 12, Evolution Cost 4 (From Level 5)
[During your turn] For every 2 Evolution Sources, this Digimon gets «Security Attack +1». (When this Digimon attacks Security, increase the number it flips over by 1.)

Metal Greymon's effect is just barely visible beneath War Greymon's, used to confirm V Jump's statement that evolved Digimon inherit the effects of the cards beneath them.


Metal Greymon
Level 5/Vaccine/Cyborg
[When it attacks] [Once per turn] When this Digimon destroys your opponent's Digimon by battle, put this Digimon in the Active state.

This is speculation, but War and Metal Greymon suggest several things about the game mechanics. The first is "Security," which based on its inclusion on a high-level card seems to be important to the game's win condition. Security is probably a mechanic similar to the Shields of Duel Masters or Life Cloth of Wixoss; cards which protect the player from direct attacks, and when all Securities are removed, either the player loses or they'll be vulnerable to a direct attack that will win the game for their opponent.

Note that «Security Attack +1»'s rules text states it "flips over" (めくる mekuru) one more. (Using the counter word 枚 mai, which is used for long flat objects like trading cards.) This verb is generally used to mean turning something to its opposite side--a page, a card, and if you remember the Nintendo eShop game Flip Wars, in Japan it's called Battle Sports Mekuru. While mekuru can also be used to mean "tearing off," the word suggests to me that Securities are cards turned face-up, which is exactly what happens not just with Shields or Life Cloth, but also with Life cards in Z/X and Damage Checks in Cardfight!! Vanguard. Moreover, Securities are counted with the counter word 枚 mai which is used to count long flat objects, including cards. In updating Digimon's game mechanics for a modern TCG audience, it wouldn't be surprising for Bandai to follow this design trend. If all this follows, that means War Greymon has the potential to flip two or three Securities in one attack.

The question is, why are Security cards turned over at all? The cards being turned face-up suggests there's important information both players need to check. In other games that do this like the aforementioned Duel Masters, Wixoss, and Z/X, it's to check if the card has a special ability that resolves when revealed. (Shield Triggers for Duel Masters, Life Burst for Wixoss, Ignition effects for Z/X.) In those games these abilities do things like instantly summon the monster with the ability, use an instant effect without paying its cost, or draw additional cards for the defending player. Security cards are probably normal cards placed randomly from the player's deck, some of which will have abilities that interfere with the opponent's battle phase to prevent one-sided games.

Metal Greymon's effect is interesting because it mentions the term "Active," which is also used in Bandai's Dragon Ball Super TCG. In DBS "Active" refers to vertically-oriented cards (portrait position) which are the opposite of horizontally-oriented "Rest" cards (landscape position) equivalent to Magic's "untapped" and "tapped" states, or Cardfight!! Vanguard's "stand" and "rest" positions. If this is what Bandai's going for, Metal Greymon can attack a second time in a turn provided its previous attack destroyed a Digimon--so it can't use the effect by destroying a Security card, but it could destroy a Digimon and a Security rather than having to choose between attacking one or the other.

And since War Greymon inherits the effects of the cards beneath it, a War Greymon with both Agumon and Metal Greymon beneath it gets +2000 DP while attacking, can attack twice in a turn by attacking a Digimon, and breaks an additional Security card. (It will not, however, gain 4000 DP total. Agumon's effect only applies "while" it is attacking, not until end of turn, so the initial power boost goes away at the end of the battle, then reactivates on the second attack.)

[Update: Agumon's effect on the official website has changed since its appearance in V Jump. The revised text simply gives it +1000 DP during its owner's turn.]

Something else to note is that at the website's higher resolution, Agumon's Evolution Cost states "From Level 2." While V Jump merely stated that Digimon would evolve from Digitama in the card game, this implies that players will actually have to play Level 1 and 2 Digimon first, like Botamon and Koromon--traditionally the Baby I and Baby II stages of a Digimon's life cycle are omitted from the card games because they are not capable of battling in the original virtual pet toys. Having Level 1 and 2 Digimon in the game would have a significant impact on gameplay, with a player potentially going into Level 3 with 4 Memory already available. There are other possibilities, like first and second levels being condensed together in some way, but nothing definite can be said until more is revealed. 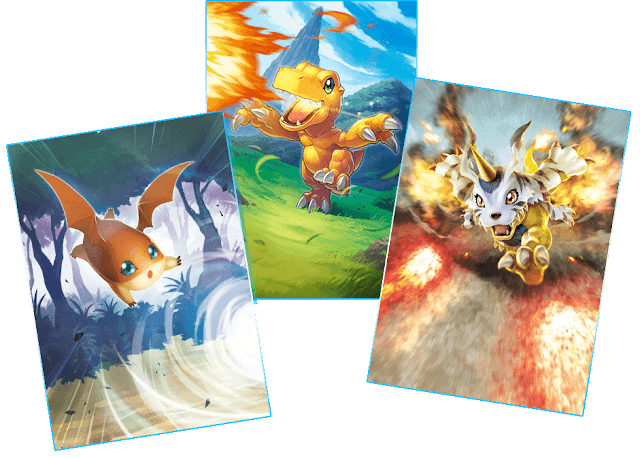