In a livestream aired at 3 AM Pacific Standard Time, Bandai Namco revealed several upcoming promotional cards for the 2020 Digimon Card Game, and also showed a 2020 concept trailer for the entire Digimon franchise that revealed two more Digimon effects from the upcoming TCG. Bandai also opened an official Digimon Card Game Twitter account shortly before the livestream aired, where it gave us our first look at the product packaging for the Starter Decks "Gaia Red," "Cocytus Blue," and "Heaven's Yellow." The header for the Twitter account--which also appears as the illustration for the game's first promo pack--suggests V-mon, Liollmon, Kokuwamon, Betamon, Tentomon, Dracomon, Plotmon, Goblimon, Pico Devimon, Patamon, and Guilmon, are all coming to the card game. 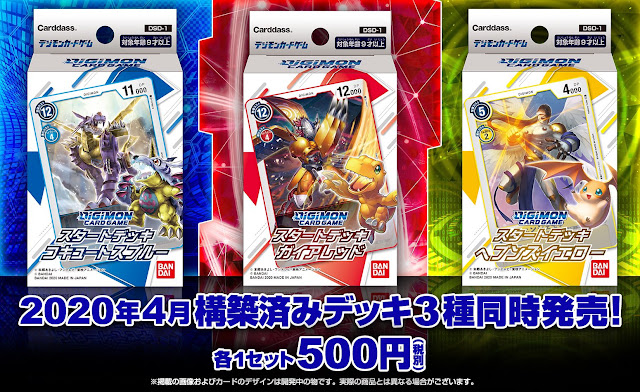 The Starter Decks are on-schedule to launch in April at 500 yen per deck. The packaging states that the game is for ages 9-and-up, which is noticeably higher than the current standard for TCGs: Yu-Gi-Oh!, Pokémon, Buddyfight, and Cardfight!! Vanguard are all recommended for children 6-and-up. 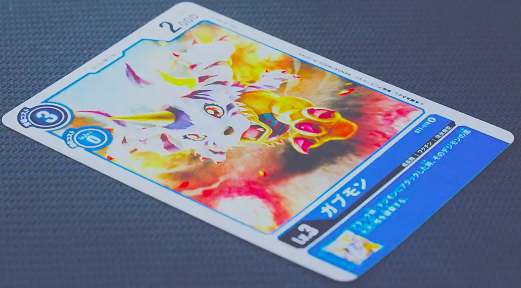 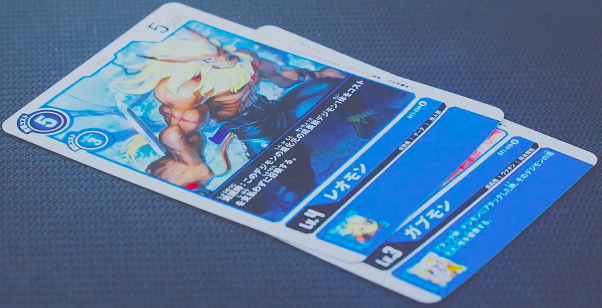 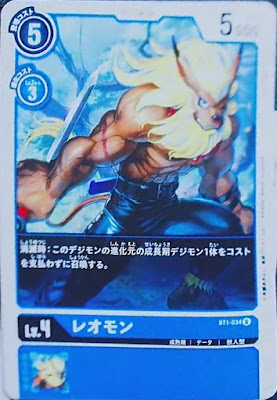 Note that this is the first instance of "Summon" (召喚 shoukan) appearing in effect text.
Promotion Pack ver. 0.0 cards 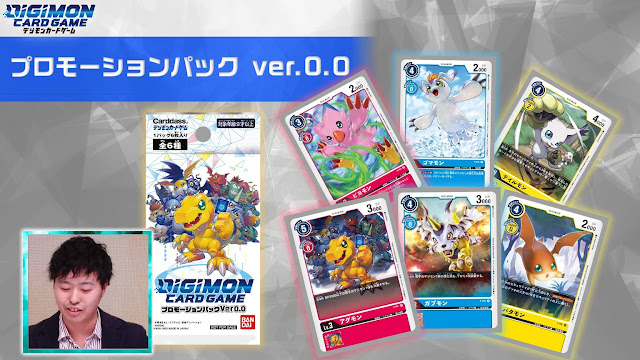 These cards will appear in promotional pack ver 0.0, which are not for sale and will be distributed to "various places." Fans are encouraged to check the official site and Twitter account for more information at a later date.

The promo packs will most likely be given out as participation prizes at hobby shops that host 2020 Digimon Card Game tournaments, as an incentive for players to participate; this is how Bandai and other manufacturers have done similar promo packs in the past. Several of these cards are partially obscured or at too low a resolution to make out distinct kanji, thus the effects below are incomplete. 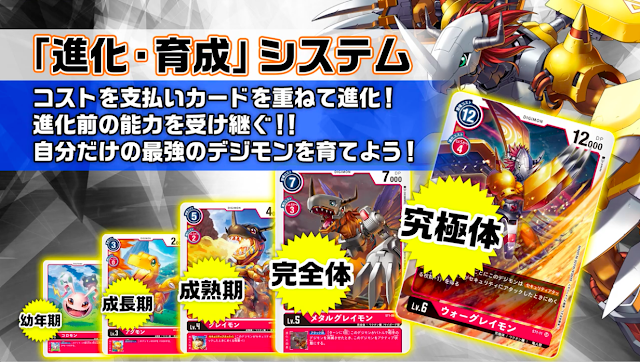 During the official Digimon livestream Bandai representative Goto-san described the TCG as "a game where both kids and adults can enjoy battling and collecting," and presented several slides clarifying elements of the game. Digimon begin as a "Baby" level card that features a Digitama, Baby I, and Baby II Digimon in a single illustration, which is considered Level 2. They then evolve to Child, Adult, Perfect, and Ultimate, with cards being overlayed on top of one another so that the colored text of each card is visible beneath it. Level 2 Digimon can also have inheritable effects like higher-level ones, but the example card was not legible. 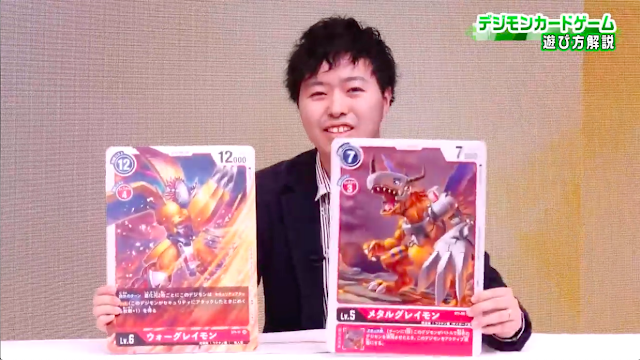 Metal Greymon
Level 5/Vaccine/Cyborg
Entry Cost 7 Evolution Cost 3 (From Level 4)
[When it attacks] [Once per turn] When this Digimon destroys your opponent's Digimon by battle, put this Digimon in the Active state. 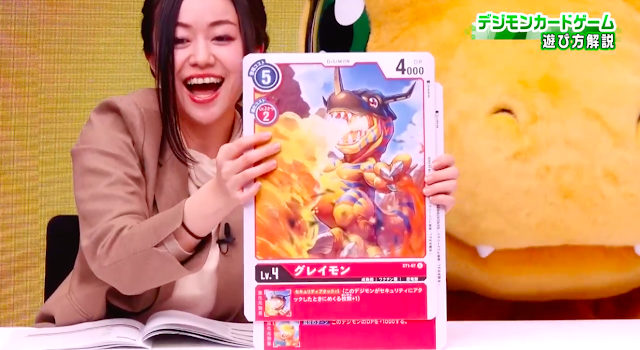 Greymon
Level 4/Vaccine/Dinosaur
Entry Cost 5 Evolution Cost 2 (From Level 3)
4000 DP
[Security Attack +1] (When this Digimon attacks Security, increase the number of cards it flips over by +1) 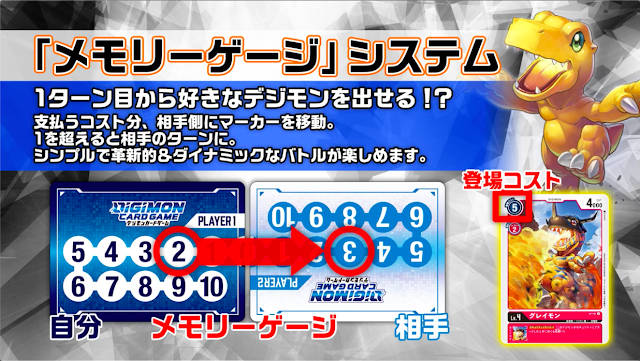 "You can send out your favorite Digimon right from the first turn!?
Your opponent's marker moves proportionate to the cost paid.
Exceed 1 and it's your opponent's turn.
Enjoy simple, innovative & dynamic battles."

Goto also gave a brief explanation clarifying the Memory Gauge system. Players can actually play Digimon of any level right from the first turn of the game, but this will move the Memory Gauge toward the opponent equal to the Digimon's Entry Cost, and if it surpasses the "1" mark it ends the current turn. This means that you could theoretically play a Level 6 Digimon like War Greymon right on the first turn of the game--but you would be giving the opponent a massive amount of Memory to spend, so they would be able to play even more Digimon than you without their turn ending. 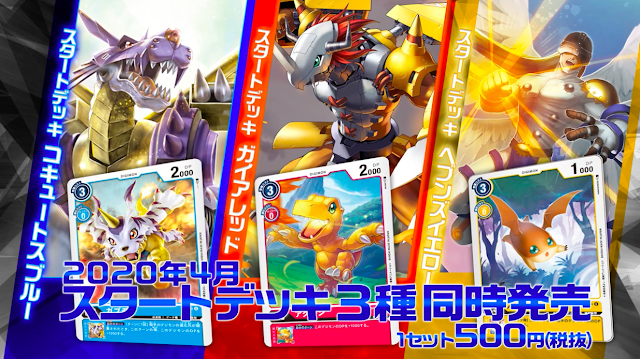 The stream also partially revealed the Starter Deck print of Gabumon, which has a different effect from both the promotional card and the version seen in the trailer. Agumon is unchanged from the website version, and Patamon's text is illegible save for the fact that it happens when it attacks and modifies the opponent's DP. The cards are illustrated by Watanabe Kenji and As'maria, two of the franchise's longest-serving artists.


Gabumon
Level 3
Entry Cost 3 Evolution Cost 0 (From Level 2)
2000 DP
[During your turn] (Once per turn): When your opponent's Digimon's Evolution Source is [illegible] until end of turn, this Digimon's DP gets +1000.

At this point, it appears Digimon cards can have two kinds of effects: those written in the colored effect boxes at the bottom of a card, and those in transparent boxes imposed over the artwork. Only colored effects appear to be inherited by evolutions, which is how Metal Greymon and War Greymon were portrayed on the official site, as well as Leomon and Gabumon in the new trailer.

For example, the promo print of Agumon has a transparent box effect that destroys an opponent's 3000 or less DP Digimon when it enters play, while the standard Agumon's colored effect gives it +1000 DP during its owner's turn. The former is the kind of effect a game designer wouldn't want players getting to recycle all the time, while the latter is much more balanced as an inheritable ability. Some of the effects already allow powerful combinations; combining the entire Starter Deck War Greymon line together creates a Digimon with 13000 DP that can break 4 Security in one attack while also destroying an opponent's Digimon by battle.