Updated product images for the upcoming Starter Decks, DSD-1: Gaia Red, Cocytus Blue, and Heaven's Yellow, feature Yagami Taichi, Ishida Yamato, and Takaishi Takeru, positioned to line up with each deck's face cards through the packaging plastic. The decks will launch on April 24th for 500 yen each, and according to retailers, will contain 53 cards total plus two Memory Gauge markers. (The number of unique cards in each deck will be 16 according to the official website.) They will launch alongside four (still unrevealed) card sleeve designs, and be followed up by the first expansion, Booster Set ver. 1.0: NEW EVOLUTION, on May 15th.

Booster ver. 1.0 will comprise 115 cards total, divided into 45 Commons, 30 Uncommons, 28 Rares, 10 Super Rares, and 2 Secret Rares. Each booster pack will contain six cards plus one index card, every booster box will contain 24 packs, and each carton will contain 12 boxes. At least one card in every pack will be a parallel foil. Booster boxes will retail for 4,752 yen (approx. $43) and cartons for 57,024 yen. (approx. $513) Cartons are intended for sale to stores rather than individuals, but no one's stopping you.

The four card types in the 2020 TCG are Digimon, Option, Tamer, and Digitama cards. Digimon and Option cards function as they did in past games, with Digimon battling as the player's permanent creatures and Options being single-use cards that are discarded after taking effect. Tamer cards stay in play after their cost is paid, but cannot be attacked. The final card type, Digitama, represent a Digimon's egg, Baby I, and Baby II evolutionary stages, are printed as Level 2s and have a white card back instead of a blue one. Digitama cards do not go in the main deck, but are set aside into a separate "Raising Area." (育成エリア Ikusei Eria) The sample Digitama card given, Koromon, depicts both Botamon and Koromon and has an inheritable effect that gives its evolved forms +1000 power under certain (illegible) conditions. 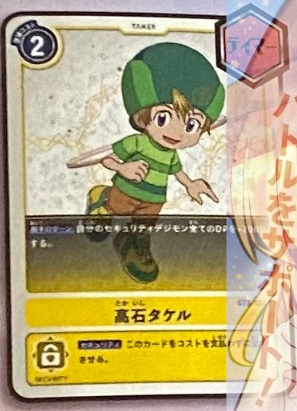 Takaishi Takeru
Tamer
Entry Cost 2
[During your opponent's turn] All of your Security Digimon get +2000 DP.
[Security] You may play this card without paying the cost.

In addition to their inheritable effects located at the bottom of Digimon cards and non-inheritable effects in the center, Option and Tamer cards can also have a yellow "Security Effect" at the bottom of their card. Although not stated explicitly, these seem to resolve when that card is a Security and turned face-up by a Digimon's attack--Takeru's Security effect allows him to be played without paying his cost, but doesn't specify a timing. Past cards shown increase the number of Security cards they "flip over" when they attack.

While the placement of emblems in the article strategically covers the base powers and summoning costs of certain cards, it does show previews of the Yellow-aligned cards Angewomon and Unimon, as well as the Blue-aligned Garurumon. Garurumon has an inheritable ability that targets an opposing Digimon's Evolution Sources (the cards beneath it) but the full text is too blurry to make out. Angewomon has a non-inheritable ability that affects the bottom of the Security Area, and incorporates an illegible keyword, the reminder text of which states it "places the top card of your deck into the top of your Security." (In other words, a healing skill.) 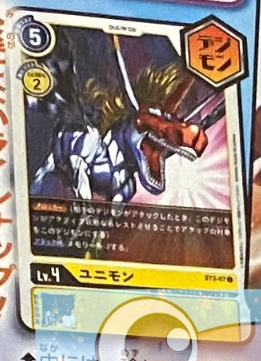 Unimon
Digimon
Entry Cost 5 Evolution Cost 2
«Blocker» (When another Digimon attacks, by turning this Digimon from the Active to Rest state, you may make this Digimon the target of that attack.)
[When it attacks] Move Memory (left?)

Unimon has a non-inheritable keyword ability that allows it to redirect an attack to itself so long as it can be rested (in Magic: The Gathering terms, tapped) preventing the opponent from battling another more valuable Digimon or turning another Security face-up. 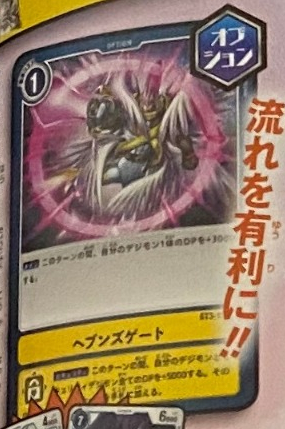 The next issue of V Jump will include 2 promotional cards, foiled alternate prints of Garurumon and Were Garurumon with different effects. This issue also clarifies that the upcoming promotional card pack will be distributed at future events, with the exact dates and locations to be announced on the official Japanese website.

Thus far the 2020 Digimon TCG appears to be based upon a very heavily modified Chrono Clash engine--the primary similarities come from the Memory Gauge and Security mechanics, which are very similar to the titular Chrono Clash Gauge and the Guardian stack. In Chrono Clash Guardians are five cards stacked face-down at the start of the game after shuffling the deck, and the objective of the game is to attack a player when they have no more face-down Guardians. Attacking them while they have a face-down Guardian turns it face-up; if it has Guardian ability then its owner can choose whether or not to resolve it, and if it's a Battler (equivalent to a Digimon) then the Guardian Battler does battle with the attacker, potentially destroying them before the Guardian itself is discarded. Already there are certain effects that empower "Security Digimon," which are most likely an equivalent mechanic.

While we can use the Chrono Clash rules to infer some possibilities about the new Digimon TCG, it's important to bear in mind that there are already significant differences, and there may be more to come. For example, the gauge in CC represents units of time and pushing the gauge over to the opponent's side while battling multiple Guardians causes the turn to immediately end--it's not clear if this holds true for Digimon, because the Memory Gauge doesn't have the same connection. Another difference is the Digimon themselves having multiple possible costs instead of just one, and effects that are worded in plaintext rather than represented entirely by icons. (Effects in Chrono Clash more resemble a flowchart of emojis than any of the cards above.)

At this time Bandai has not marketed Chrono Clash in Japan, and this reworking of its template for Digimon was likely done in response to the Digimon Universe Appli Monsters TCG's commercial failure back in early 2017. Based on what we've seen so far, the new game works something like this:
Some lingering questions: