The March 21st issue of V Jump magazine contains the detailed rules for the 2020 Digimon Card Game, out this April. The game is played with decks made up of exactly 50 cards containing Digimon, Tamer, and Option Cards, with an additional "Raising Area" set aside made up entirely of Digitama Cards. The exact limits of the Raising Area were not discussed, but the first Starter Decks come with three Digitama Cards and the sleeves launching alongside them especially for that zone number five in every pack. Up to 4 copies of any card with the same Card Number can be included in a deck.

There are four phases to a turn in the Digimon Card Game:
At the beginning of the game both players shuffle their decks, set 5 cards face-down to form their Security Area, and draw 5 cards to create their opening hands. As revealed previously, a player wins the game by attacking the opponent while they have no Security remaining, and gets to that point by attacking the opponent's Security without being stopped by a Blocker like Unimon. When a Security is attacked it's flipped face-up, and if it's a Digimon, it battles the attacking Digimon as a Security Digimon--similar to Bandai's Chrono Clash card game. If the card is instead an Option or Tamer Card, its Security Effect resolves.

The Entry and Evolution Costs for Digimon are paid using the Memory Gauge shared between players. As soon as a player has 1 or more Memory, it is their turn. In the example presented in the issue, the turn player has 5 Memory and places a Digimon with a cost of 10; the opposing player now has 5 Memory, and it becomes their turn as a result. 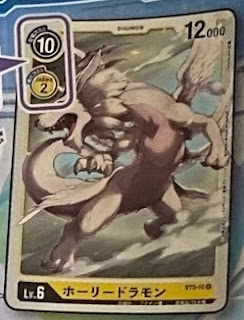 The Raising Area is the most interesting mechanic revealed by the issue. During the Raising Phase of each turn the player can either turn a Digitama face-up, or evolve it into a Level 3 or greater Digimon, which results in it being sent straight to the Battle Area. The benefit of this is that Evolution Costs are always lower than Play Costs, Digitama Cards imbue their evolved forms with their Evolution Source effects, and every time the player evolves they get to draw a card, effectively filtering their hand using the Digimon they have available.

Since evolution, battle, and Option card use all take place in the same phase, there's a great deal of flexibility in terms of what players can do during combat. When two Digimon battle, the one with the lower power is destroyed--although the issue doesn't address whether a tie results in mutual destruction or mutual survival. No mention is made of the "summoning sickness" mechanic previously used in Chrono Clash, implying every Digimon can attack as soon as it's placed. 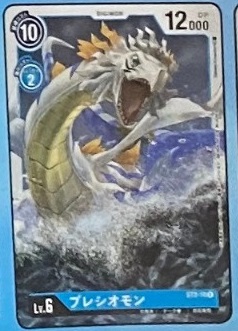 The issue also showed the game's first vanilla Level 6s, Plesiomon and Holydramon. These Digimon have 12000 power instead of the 10~11000 standard for Ultimates, and Entry and Evolution Costs of 10 and 2, but no effects. In addition to these, Dracomon and Coredramon made a cameo in the player's hand, establishing all but the very last card in Starter Deck 1: Gaia Red. 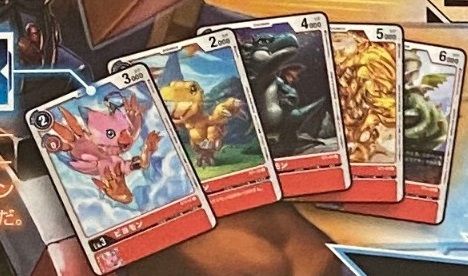